The second day of the battle sees Azhag's massive horde besiege the walls of the mighty city of Wolfenburg.  A High Elf relief force is en-route, but will it arrive in time to lift the siege? 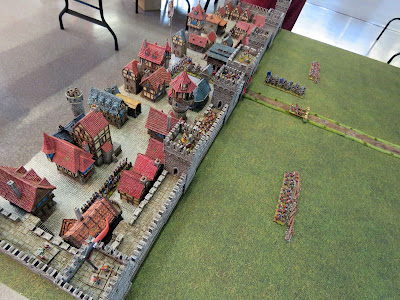 The Garrison of Wolfenburg deploy cannon batteries in the towers on either side of the gatehouse, and a mix of crossbow, handguns and halberdiers on the walls, with a small number of troops held in reserve. 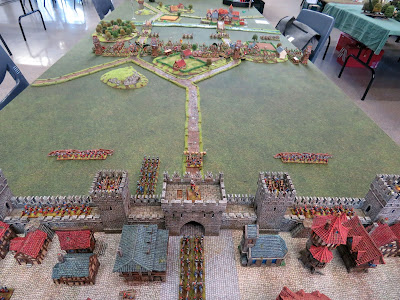 In an effort to delay the Orc horde and allow more time for the High Elves to arrive, a cannon battery, and units of crossbows and pistolier cavalry are deployed outside the city wall in prepared positions. 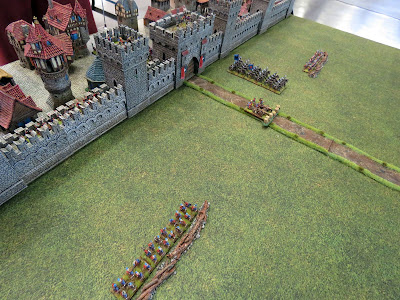 The Orcs meanwhile have captured two Empire Mangonel and set these up to attack the gatehouse.  Once again, Goblins lead the advance, with huge siege towers being pushed behind them by units of Orcs and Black Orcs. 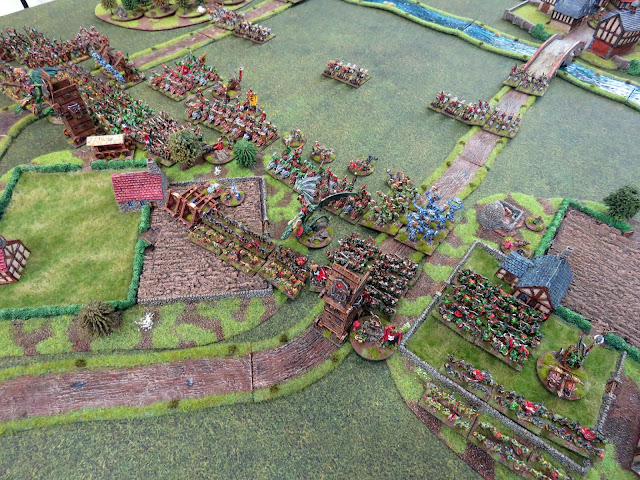 Realising the danger of the approaching High Elves, the Azhag also deploys wolf riders and chariots on the main approach to the city, to prevent the Elves from wrecking havoc in the horde before it can reach the city. 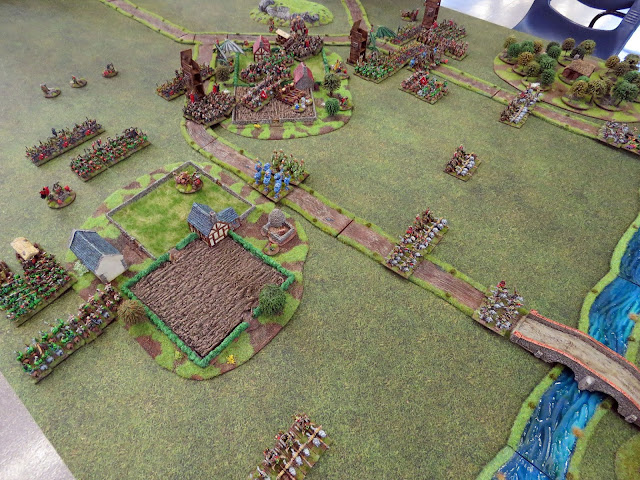 Still carrying much of their plunder from Ristedt, the initial Orc Advance is halting, with only a few of the enormous siege towers moving forward. 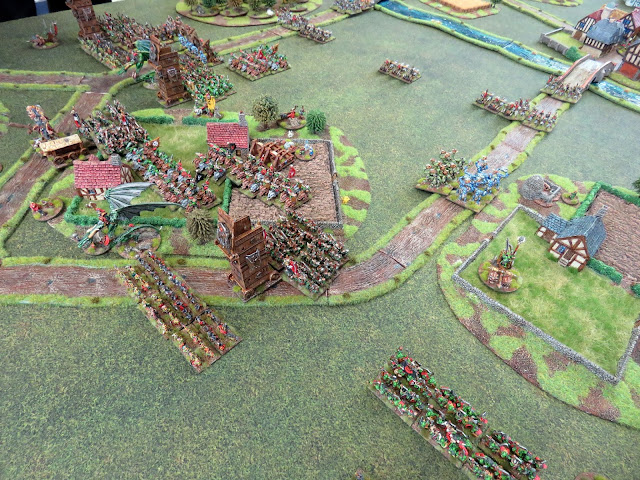 The initial volley from the Orc mangonels fall short and the Empire troops pepper the approaching giants with well aimed cannon-fire.

The enraged Giants charge forward, but the defenders outside the walls are ready and both Giants are wounded and driven back from the barricades.  A brave unit of pistoliers surges forward to charge into the horde.  They choose their targets carefully and ride down a brigade of goblins.

But now the mangonels find their range and they strike the gatehouse with devastating force, damaging the mighty stone structure. 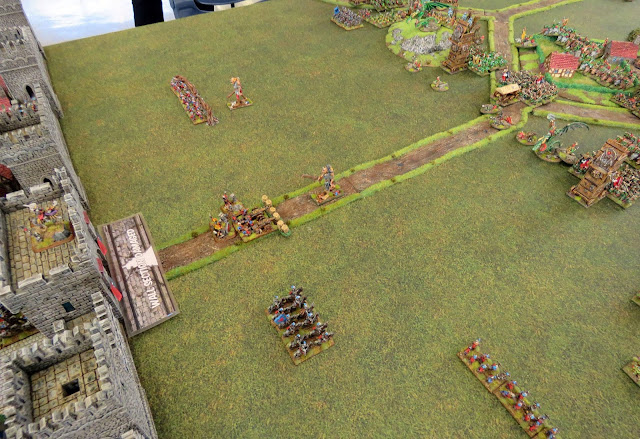 Seeing that the gatehouse is almost destroyed, opening a way into the city, Azhag orders forward his Boar Riders.  They crash through the Empire barricades and slay most of the defenders outside the city walls. 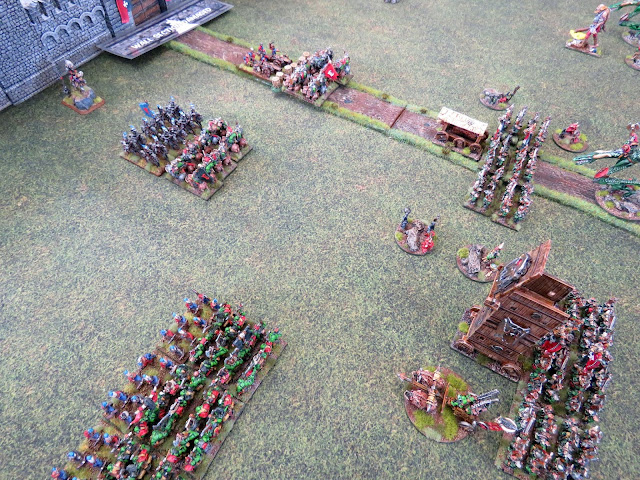 The Orcs are now drawing close to the city walls in some places.  Stubborn pockets of defenders still hold out on the delaying the advance of fully one half of the horde, and the Goblin infantry has been unable to deal with the Pistoliers in their midst. 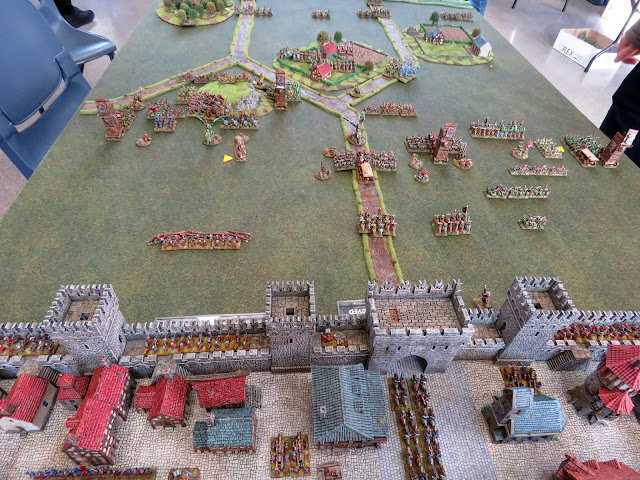 Now the Orc rock lobbers are within range and a devastating rain of rocks causes another section of wall to buckle, as the gatehouse is pulverised and finally collapses.  The Orcs cheer as the way into the city is open! 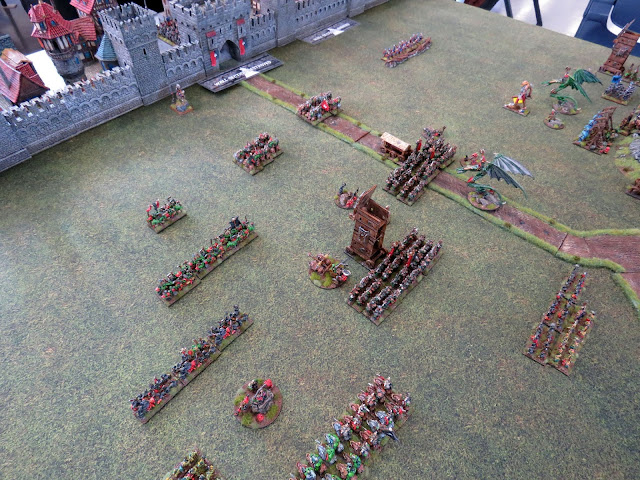 Once again the sorcerous power of Azhags Crown of Command fails and the Orcs bicker amongst themselves about who will get the spoils from inside the city, rather than exploiting the opportunity their machines have created. 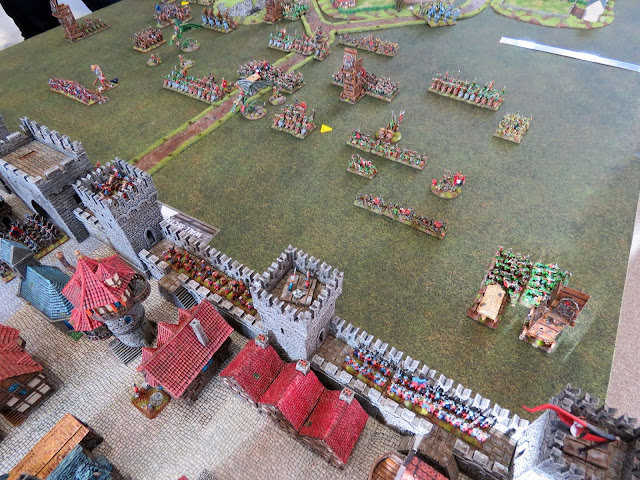 A single unit of Boar Riders charges through the damaged gatehouse and is met with fierce opposition by the Empire cavalry who now plug the breech.  The Orcs are driven back but both sides suffer heavy losses. 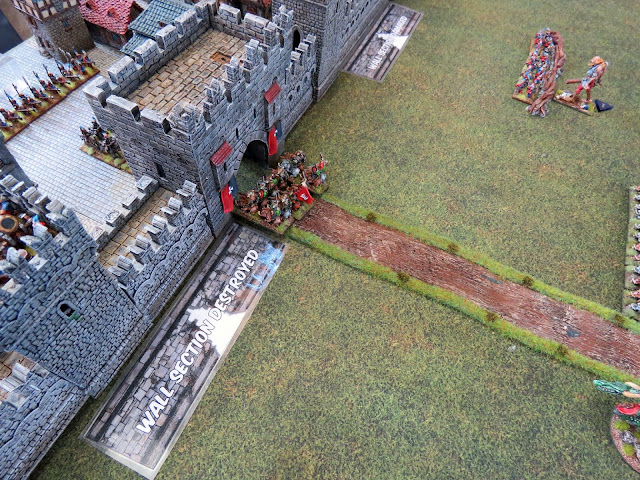 Finally the High Elves arrive!  Chariots rumble through the town of Ristedt. 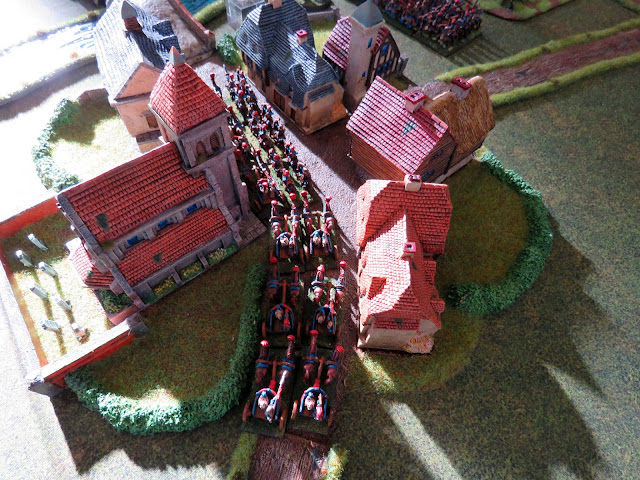 Silver Helm Knights form up in glittering ranks at the banks of the river Eiskalt. 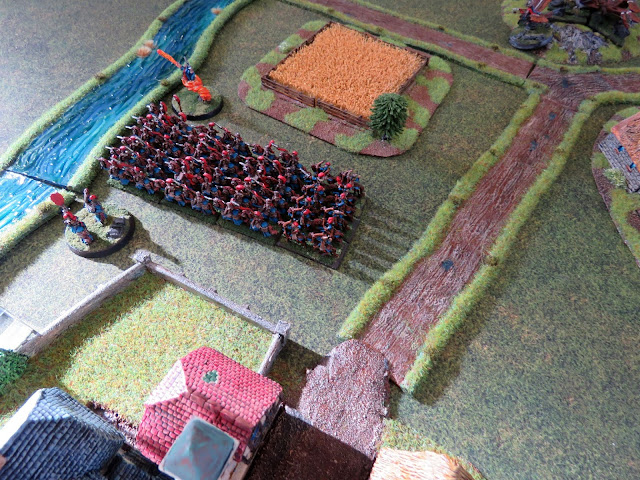 Giant Eagles perch on the hill overlooking the crossroads on the northern approach to Ristedt as the Elven hero who leads them picks a vulnerable target amongst the Orcs.  The Mangonels are selected and are torn apart with savage ease. 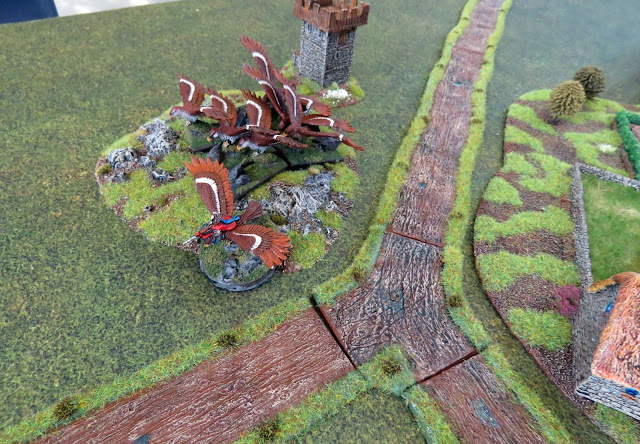 Now it's a race to see whether the Orcs can claim the city before the High Elves can destroy them.  The Boar Riders at the gatehouse mount another charge into the city, cutting down more defenders, but again they are pushed back.  However the numbers of Empire defenders are dwindling. 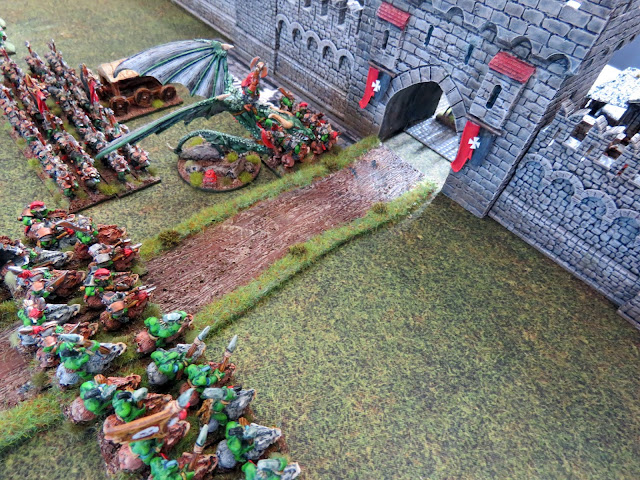 The barrage from the Rock Lobbers cause another section of the city wall to collapse, killing many handgunners who had been stationed there. 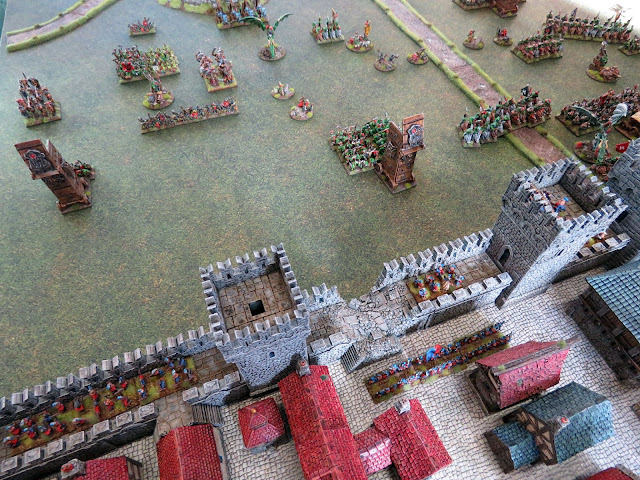 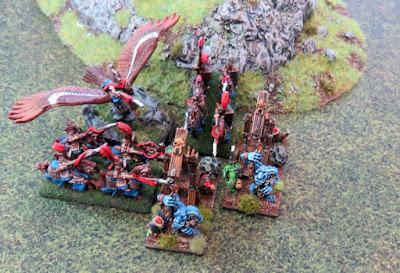 Meanwhile the Goblin Chariots and Wolf Riders blocking the Elf advance put up a surprisingly stiff resistance and many elf chariots and even some Silver Helm Knights are slain as the Elves hack their way forward.
The Eagles continue their advance,  however they make the mistake of pressing their attack on into a unit of Trolls and are torn apart by the ravenous Trolls.
The first unit of Silver Helm knights now reach the Orc lines and ride through goblin stragglers before destroying several Orc Rock Lobbers,
But they are too late. The Orcs reach the city walls and attack from their siege towers. 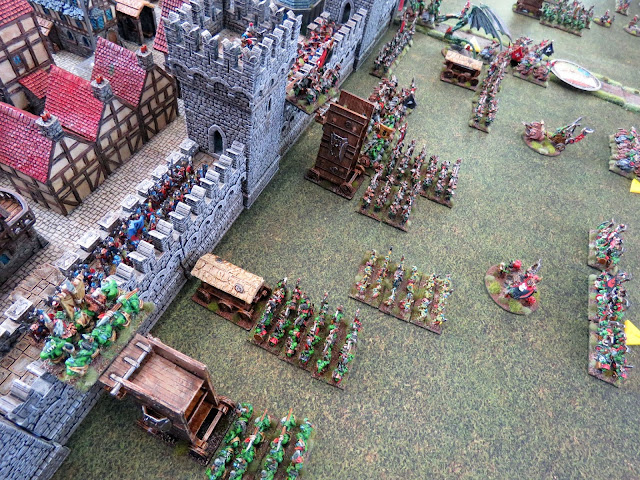 A fresh assault on the ruins of the gatehouse, supported by a mighty Wyvern and infused with the Orc Waaagh magic, pushes the defenders back, and not even the brave efforts of Marshall Blucher can stop their brutal assault. 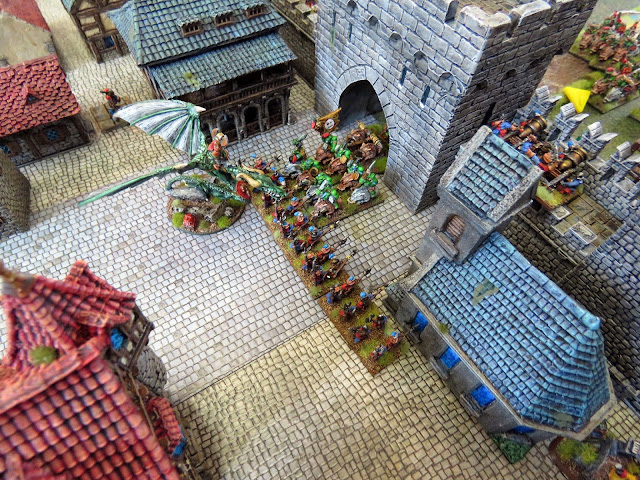 The Empire troops held out for 7 turns and managed to keep the Orcs at bay, but now the City of Wolfenburg falls and the Orcs are victorious! 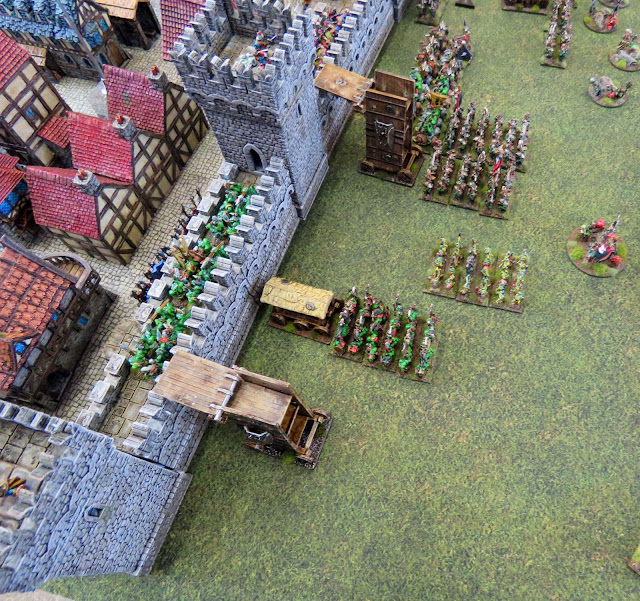 Editors Note:  A huge amount of fun was had over the weekend. Day Two was not quite as close as Day One, although the Orcs still had one roll on turn 7 where they may have lost the game.  The Elf Advance was not as decisive as it was in the playtest, and if running this again I'd probably modify the scenario to allow the Elves to bring on 1D6 units each turn, starting from turn 3. 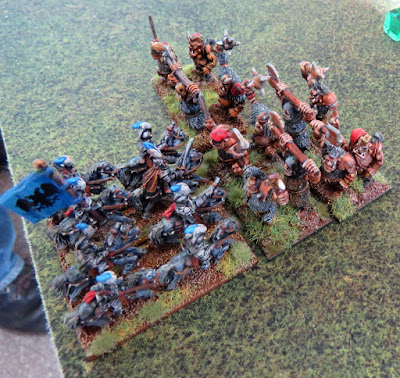 The Pistoliers served the Empire well and their brave charge on the flank cost the Orcs valuable time and slowed the advance of many units.  Only the intervention of Ogres finally managed to see these brave sons of the Empire off the table. 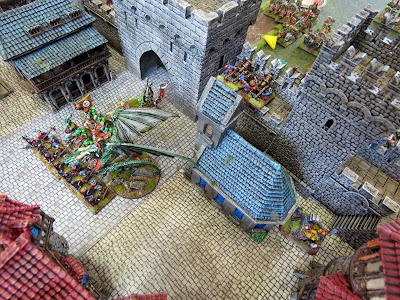 For the Orcs, the Giants were good in absorbing fire, and attacking only enemy troops, although not as powerful as the day before.  The Boar Riders really carried things on both days, and their offensive power - when supported by characters and Waagh magic is truly phenomenal.
SCENERY SOURCES
Battle Mats by Deep Cut Studio
Trees and City Gatehouse by Kalistra
Roads and Rivers by Timecast Models
Farms, Bridge and some city buildings by Battlescale
City Walls and other city buildings, designed by Printable Scenery, Printed by OTP Terrain
Town of Ristedt by Total Battle Miniatures
Crossroads tower by Spellcrow
Older Posts Home
Subscribe to: Posts (Atom) 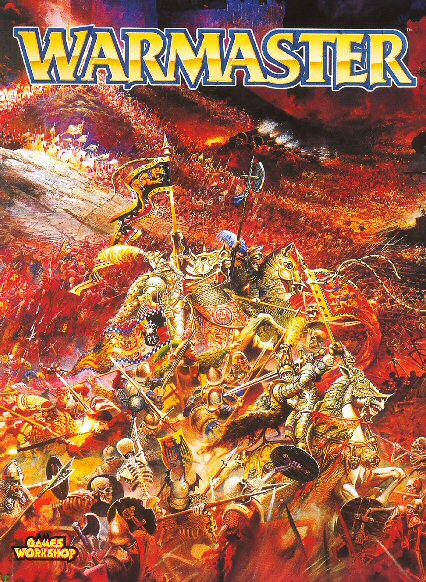